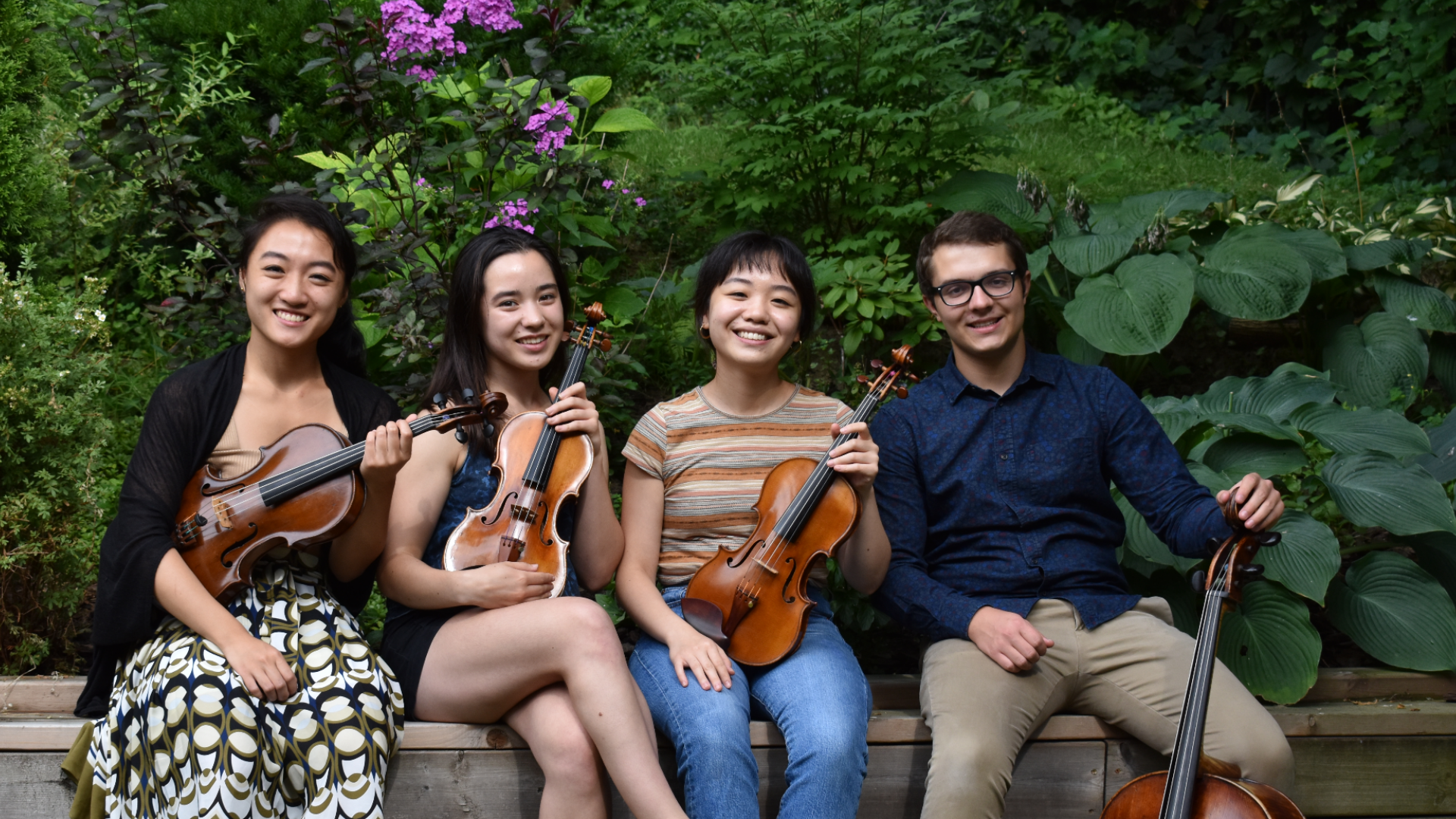 Music Niagara is proud to present a brand-new addition to our ‘At Home Concert Series’ line up, the Kiri Quartet. This group was put together by the lovely Emma Meinrenken. This is Emma’s third appearance in our line up as she opened our ‘At Home Series’ back in July. This time Emma is joined by three incredibly talented musicians: cello player Matthew Christakos, violinist Jasmine Mengija Lin, and Canadian violinist Lynn Sue-A-Quan. Countless awards and achievements are shared between all four performers, some of which include studies at Julliard, Bachelor’s Degrees, National and International first place finishes, and dozens of notable performances over the years. Emma and Jasmine are also Alumni of Music Niagara’s very own Performance Academy. These four amazingly talented and young virtuosos have bright futures ahead of them in the world of music and we are delighted to have their skills and talents on display for you right from the comfort of your own home. Please enjoy.

Matthew Christakos, from Toronto, entered the Curtis Institute of Music in 2019 and studies cello with Carter Brey and Peter Wiley. All students at Curtis receive merit-based, full-tuition scholarships, and Mr. Christakos is the Joseph Druian Fellow. Mr. Christakos’s recent awards include winner of the 2019 Canada Council for the Arts Michael Measures First Prize, second prize in the Canadian Music Competition’s 2019 Stepping Stone, and first prize at the 2017 Toronto Kiwanis Music Festival President’s Trophy Competition. CBC Music included him in their 2019 edition of “30 Hot Canadian Classical Musicians under 30.” Before coming to Curtis, Mr. Christakos studied in Toronto at the Royal Conservatory of Music’s Phil and Eli Taylor Performance Academy for Young Artists, where he won the concerto competition and performed as soloist with the Academy Chamber Orchestra. In 2019 he toured Canada and Spain as a featured soloist with the National Youth Orchestra of Canada. He is an alumnus of the Morningside Music Bridge program in Boston. He previously studied with David Hetherington and Hans Jørgen Jensen. He began cello at age four.

Violinist Jasmine (Mengjia) Lin studied with Atis Bankas at the Taylor Academy of the Royal Conservatory of Music for nine years before continuing her studies at the Juilliard School under the tutelage of Masao Kawasaki. She was the laureate of the Kocian International Violin Competition and has since made her debut with the Czech Chamber Philharmonic Paradubice and performed at the Mlada Praha Festival. Jasmine has been a fellowship student at Kneisel Hall, Aspen Music Festival, NAC Young Artists Program, and Villecroze Academy. In addition to being an avid chamber musician, Jasmine is also a recipient of the Gluck Community Service Fellowship at Juilliard where she works with actors and dancers to give a series of interactive concerts at various healthcare facilities around New York City. Jasmine earned her Bachelor’s degree from the Juilliard School and will be pursuing her Master’s degree at Juilliard in the fall. She plays on the 1871 Jean-Baptiste Vuillaume violin, on loan by the Canada Council for the Arts Musical Instrument Bank.

Canadian violist, Lynn Sue-A-Quan is currently pursuing her bachelors in viola performance at the Juilliard School under Hsin-Yun Huang. Lynn has performed with numerous orchestras as a soloist across North America including Aspen Music Festival Orchestra, Niagara Symphony, Guelph Symphony Orchestra, Oakville Chamber Orchestra, and others. She has won numerous competitions including the Canadian Music Competition and was a concerto competition winner for the Aspen Music Festival in 2019. She has participated in many festivals throughout the world including New York String Orchestra Seminar, Aspen Music Festival, Morningside Music Bridge, and the Szekely/Rolston Young Musicians Program. Lynn Sue-A-Quan began her musical journey at the age of 6 on the violin and in 2011, she was admitted to and later awarded scholarships at the Phil & Eli Taylor Academy for Young Artist at the Royal Conservatory of Music. There, she continued her violin studies with Conrad Chow, Barry Shiffman, and Viktor Danchenko. In 2016, Lynn began her studies in viola under Teng Li.

Music Niagara favourite, Emma Meinrenken, a Performance Academy alumni and student at the prestigious Curtis Institute of Music. Emma Meinrenken is a Dorothy Richard Starling Foundation Annual Fellow at the Curtis Institute of Music, where she studies with Ida Kavafian. Her teachers include Atis Bankas and Victor Danchenko. Emma has won top awards at numerous competitions, including first place at the Stradivarius International Violin Competition, the Jury Prize at the Jascha Heifetz International Violin Competition, the silver medal at the Stulberg International String Competition, and grand prizes at both the 2012 Canadian Music Competition and the 2013 FCMS National Competition. She was also a semi-finalist at the last Fritz Kreisler International Violin Competition. In 2016, she was a student at the Verbier Festival Academy Emma debuted with the Toronto Symphony Orchestra at the age of 10, and has since performed with many other orchestras, including the Utah Symphony Orchestra, and the Orchestre Métropolitain de Montréal.